We have got to that day – 22nd April 1967. It started out a fine day. I drove up from Streatham and the rest of my friends all got together and travelled out to Romford. There was me, Roger Whittle (my best man), Alan Jones, Andy Parker and Dave Russell. (I can’t remember but I think that I probably brought my Mum and Dad with me). We arrived at the church in plenty of time so did the only decent thing – went across the road for a pint! Here are Roger and me as we prepared for the big day. 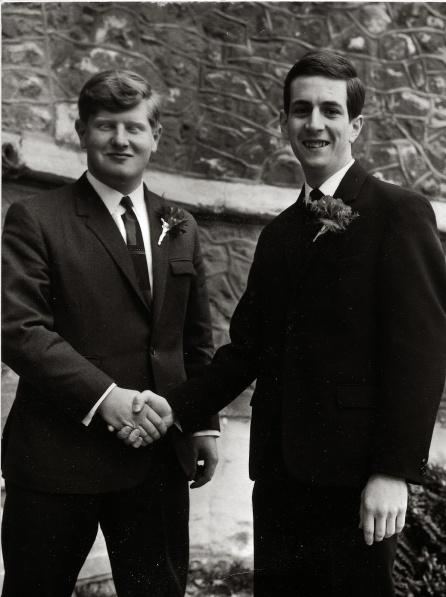 We were to be married in St. Edwards church right in the middle of Romford Market Place. At that time, the market place was a busy road with all the market stalls clustered around. The road was the continuation of Main Road up through Gidea Park. Nowadays the road stops at the top of the market and joins the ring road with the market being a pedestrian precinct. One of the “joys” of being married at St. Edwards was that, when you left the church, you had to run the gauntlet of all the shoppers in the market “rubber necking”.

As usual, I expect, the service flew by and before we knew what was happening, we were out of the church and having the photos taken. First off, we have Valerie and the bridesmaids.

Next up, we had the family. Again, left to right we have Pat and Charlie (brother and sister-in-law); my Mum, Ivy, and Dad, Charlie; Me and Valerie; Valerie’s Dad, Lionel; Valerie’s brother, Terry; Valerie’s Mum, Jessie and Valerie’s sister Marian.

We now left. You can see what I meant about the rubber neckers! 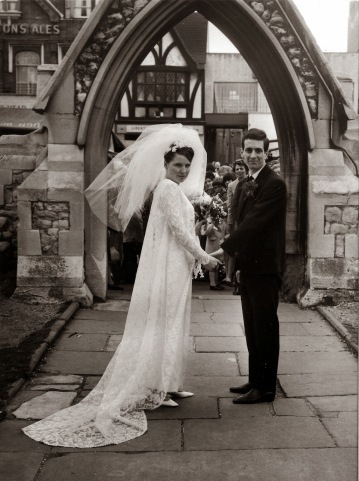 The wedding breakfast was to be held at Tweed Way Hall. The local community centre up in Rise Park, where, until then, Valerie had lived. It was a very nice hall and beautifully done out for the meal, etc. There were quite a lot of people at the “do”. You can see them all in the group photo from the church.

All of the members of both families were there with a lot of friends as well. All in all, it was a wonderful day. Valerie and I stayed for the meal and a couple of hours afterwards. I had hired a car for the honeymoon. It was a Ford Anglia Estate that I had picked up in Watford the night before.

We were going to live in Watford so that was a sensible move. Mind you, I hadn’t driven a car since passing my test when I was 18 (now 22), so the 27 mile drive from Watford to Streatham was a bit fraught. Still I had got back into it by the time I was married! During the afternoon, we prepared to leave. When we got outside with everyone there to wave us off, we found that the car had been well and truly decorated. However, we didn’t know the worst of it. We were driving out to Heathrow for the first night. We were to stay at the Ariel Hotel. The only image I can find of this hotel is a modern one but you can see that it is a circular hotel. It was quite a landmark then on the edges of the airport.

I am not going to go into the first night except to repeat a conversation that I had with Roger sometime after. It went “Bet you can’t guess what I was doing at 1am?”. Needless to say, Roger was too polite to comment. “Well, I was looking out the window watching the activity on the airport!” Somethings never change and my interest in aircraft always comes to the fore 😦
I do need to clarify on the worst of the car decoration. We got about 2 miles down the Eastern Avenue on our way into London when we both became aware of a banging noise coming from under the car. There was a touch of panic when we pulled over as we had a long way to go on our honeymoon and we were both scared that a problem with the car so close to home could ruin it. What we found, when we stopped, was that some of my so called friends had tied a rubber ball underneath the car on a long string. It was bouncing up and down giving the dreadful “bonk”. Dressed in my new honeymoon suit, I didn’t much care to crawl under the car but it had to be done. Much later, we found that Valerie’s Uncle Les had taken a video of us leaving. If you look carefully, you can see the ball bouncing up and down in that. One day I will have that video dubbed to DVD!

Having spent 20 years as a currency trader in the City of London, I moved into designing trading room software until 2001 when I retired and moved to Ipswich for a new career. I opened a hobby shop which I ran with my wife, Valerie, until 2012, when I retired. I now live on the Ipswich waterfront and spend my time programming, building model kits and creating my Marklin 3 rail model railway. View all posts by longhaireddavid